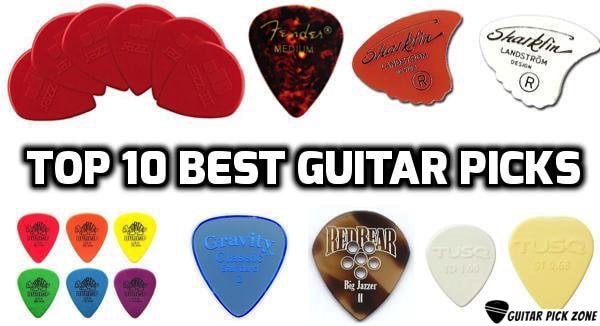 Welcome to my top 10 best guitar picks and plectrums for 2019. In the world of guitar picks, there are an overwhelming amount of options, brands, gauges, materials, and sizes available to choose from.

For that reason, I've compiled a list based solely on my opinion, Of the picks that have impacted my guitar playing over the last decade.

My aim is to review each product in-depth and then give some recommendations as to which applications and styles of guitar, each pick is suitable for.

What are the Best Guitar Picks for 2020?

It is important to remember that these are my choice which come from personal preference and feel.

The V-picks company is known for making great guitar picks for electric. You can see this just by looking at the list of guitarists who use and endorse V-picks: Carlos Santana, Billy Gibbons, and Orianthi. These famous names would suggest that this pick is chosen for lead guitar. But, whilst this might be true to a certain extent, this plectrum is actually very versatile and can suit any player of any genre. This is V-picks characteristics:

As a result of all of this, you get a sound that is louder, sharper with a brighter tone. V-picks have taken this plectrum and improved it even more by adding a small hole in the middle of it. This helps to know exactly where the pick is in your fingers at all time. This pick has a triangle shape. Which also makes it preferable for beginner guitarists. The triangle helps with dexterity and guitar pick angle. which is particularly useful when you're still developing your skills.

The Dunlop Jazz III is a popular guitar pick among guitar players because of its small size and sharper tip.  The smaller size means that the thumb can make more contact with the string.

Thus, enhancing the guitar players control over note picking. The "standard" or "regular" Jazz III is made out of Nylon and comes in either black or red.

The difference between the two colors is that the black Jazz III is stiffer than the red one. The term Jazz III has become more of a referral to the shape of the plectrum rather than what the plectrum is made of.  These now come in a large number of options with regards shape, material, and gauge. For example, you can get Jazz III picks in an XL, Max-grip, Tortex or Ultex option.

As the name would suggest, this is one is great for Jazz. However, these are favored by guitarists that play a wide variety of styles. For example, some guitar players I know even use the Jazz 3 for metal.

The Herco Flex 75's are a medium gauge is the closest thing to "The pick of destiny" it gets (the pick of destiny from the film is featured in our list of coolest guitar picks). They've been used by rock legends and the old ones from back in the day can bring a pretty penny due to the fact that the company went out of business for some time. However, in recent times Jim Dunlop, one of the top pick brands, swooped in and somehow got the right to produce these plectrums again. The Herco Flex 75's are back in business.

Notable guitar players that use these include Jimmy Page, Gene Simmons, and David Gilmour. With all of that in mind, I would have to say that this is my chosen guitar pick for rock guitar. It gives me all the attack I need whilst still maintaining the flexibility that is often associated with nylon picking. Furthermore, the list of famous rock guitarists who use this pick is long. Therefore, it becomes the obvious choice for blues, electric guitar, and rock music.

The Fender Celluloid is a historic and classic guitar pick.  They pretty much-shaped blues guitar as we know it. This is due to the blues guitar players that have used this plectrum. These include names such as Jimi Hendrix and Stevie Ray Vaughan. These plectrums have become good for rock and blues.

Guitar players like the rounded tip and the regular/standard shape as well as the gauge options which range from thin to extra heavy with a medium and heavy gauge in between. The plectrum is great for the different styles of guitar playing thus enhancing its popularity. These are some of the best celluloid picks in my opinion. However, the D'addario pearl celluloid picks are just as good.

The company that makes these are called "Graphtech" who is perhaps better known for its high-quality guitar saddles, nuts, and end-pins. However, this plectrum feels great and sounds amazing. They manage to achieve this by using a material that Graphtech invented. The material is a "man-made ivory" as is referred to by them. This special material is used on most of their guitar gear and is what separates them from the rest. The plectrum is able to produce increased harmonics in comparison to other plectrums and thus results in a much sweeter tone.

In my opinion, I'd have to say that these are one of the better plectrums for shredding and speed picking. This is due to the fact that these glide off the strings more so than plastic picks. And, they have somewhat of a beveled edge. For these reasons, I would think that this could be a great choice for metal and heavier styles of guitar playing.

I came across these unique guitar picks at my local music store when I was still a student. They intrigued me because of their name and odd shape. Essentially the only part of it that looks like a regular pick is the rounded tip. The great thing about these is that each tip is shaped differently and thus produces tones. And can be used for different applications.

This is a popular guitar pick among acoustic players as they are thinner (although you do get thicker and thinner ones) which make for the pleasant sounds of chords being strummed. They are my pick of choice for acoustic guitar strumming.  The Beatles, Trevor Rabin, and the Beach Boys have used these picks before. I often suggest these sharkfins for beginners. The resin is because they really allow for a simpler grip when compared to other guitar picks out there.

The Tortex plectrum is loved by many players for its sound and its feel. To be precise, it is the material of Tortex that makes them so loved. The plectrum comes straight from the factory with a fine layer (almost sand-like) for a better grip. But I find this layer to wear away very quickly. The popular guitar pick provides the player with a bright and responsive tone, referred to by Dunlop as a "snappy" sound.

In simple terms the means that the plectrum has a fantastic attack.  You can get the most popular shapes in Tortex material as well as choose from a full spectrum of gauges for each shape. The yellow tortex is one of the nicest sounding in my opinion. And are the perfect thickness for electric. I absolutely love these.

The nylon plectrums with max grip are another very popular pick by Dunlop guitar picks. The nylon Dunlop's have been used by artists such as Jimmy Page of Led Zeppelin and Jonny Greenwood of Radiohead. However, the addition of Max-Grip is a new feature that you can choose. This material will produce a much warmer tone compared to other materials. The Dunlop nylons are known for their superior grip.

This is because of the microdots that form little "stubs" mentioned above. The pick thus remains tightly in the player's fingers, improving control and makes for much less slipping. I like to recommend the Max grip nylons for acoustic guitar players. Specifically, the lighter gauges.

The Gravity Guitar Picks are a relatively new addition to the plectrum market. But is seriously worth mentioning. The reason is due to their growth in popularity. And their fantastic products. These are made from an acrylic material which as far as we know, has never been used as a material for a plectrum before.

The thick acrylic material makes for a much more Treble-orientated sound. As well as being higher on the decibels in comparison to other plectrums on the market. Bluegrass guitar players tend to like these a lot. Possibly because it is thicker, allowing for more control with hybrid picking. Bluegrass music requires speed picking. So does shredding some lead guitar. Therefore, I've chosen the Gravity classics as my top choice for shredding and speed.

D'addario (Planet Waves) has this range of picks with one of the best grips on the market. This feature is the checkerboard-like grip on the pick. Little squares have been strategically placed with divots in between that enhance the grip dramatically for the guitar player. These are also supposed to be very stable in the hand, which prevents your hand and fingers from getting pain.