by Justin
in Guitar Pick Reviews
Comments are off for this post.

Metallica Picks: A Guide To Their Plectrums 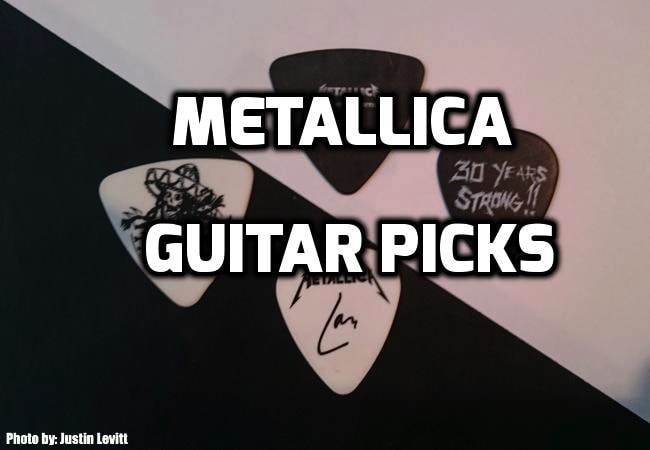 Metallica picks, They are here and they are badass! If you're a Metallica fanatic and have yet to catch one at their concerts, this is the next best thing. We'll tell you all there is to know about the Metallica Range

What are these Metallica Guitar Picks?

These guitar picks are made by Jim Dunlop, who is one of the biggest names in the guitar pick industry, if not the biggest. In this case, Dunlop offers you the same shapes as we all know and love but there's one awesome difference. The Metallica picks have seriously cool artwork and are designed to match the exact picks the band uses on tour.

Metallica's range has options with regards to the different artwork and shapes available. The same applies to the different materials used however they still stick to the exact ones the band uses. There are also other guitar pick brands out there who have the rights to create official Metallica guitar picks. However, these picks are do not claim to be the official ones and so if you are on the lookout for genuine Metallica picks we suggest making sure they are made by Jim Dunlop. Having said that, the other Metallica guitar picks made by other companies are still awesome and worth a mention.

Are These Real Metallica Memorabilia For Sale?

If you are looking to sound like Metallica then these are cool because you can be assured they're the same as the ones James and Kirk use. This means you'll be one step closer to achieving the same tone. Guitar picks are important to the overall sound and tone and that is why the Metallica guys use the best. These are also cool because the artwork on the plectrums match the exact guitar picks Metallica use.  As one can see in the image below, those are Metallica guitar picks my brother and I caught at a Metallica concert in South Africa back in 2012. The shapes in the range we can confirm, are identical to James Hetfield and Kirk Hammett's guitar picks. The range includes:

If you are a Jame Hetfield fan then you surely would love to own this epic Hetfield signature guitar pick tin by Jim Dunlop, wouldn't you? The Pick tin comes with 5 guitar picks made by Jim Dunlop with a gauge of 0.88mm. If you didn't already know, James Hetfield uses this exact gauge and guitar pick. What is cool about this particular tin is that it features artwork by James Hetfield himself.

This artwork was inspired by Hetfield taking into account some of his favorite things. And if that wasn't enough, the black pick in the tin is an actual replica of the guitar pick Hetfield uses on tour. The tin has two captions. The first caption reads, "Pick Stash" and the second caption reads, "James PapaHet Hetfield". Both of these captions were handwritten by him. Another cool feature of this official Metallica plectrum tin is that James Hetfield drew one of his famous ESP explorer guitars with a third caption that reads, "So What". If you don't already know, "So What" is a single off their Garage Days record.

This is Kirk Hammett's official Monster Pick pack featuring five 0.88mm guitar picks made by Jim Dunlop once again. These were the exact gauge Kirk used to play as he has now moved on to the Jazz III pick, also by Dunlop. However, I believe he might still use the regular sized o.8mm pick occasionally for certain parts and songs. An extra pick has been added to this tin, and that is Kirk's signature Jazz III.

We won't mention much more about this pick now because we've got a little feature about this specific Metallica guitar pick below. Kirk Hammett is a big fan of old school horror films and even runs conventions around this hobby. The artwork on these guitar picks reflects just that, his love for old horror movies. Hence the name, "The Monster Tin". The monster tin is awesome and makes for a great place to store your guitar picks

The Ultex guitar pick material has become exceptionally popular over the last few years and the material is now offered by Jim Dunlop in many different shapes and forms. This is no different with these James Hetfield signature black fang guitar picks made from the incredibly strong and good sounding material, Ultex.

James is known for being one of the greatest riff writers of all time and thus, was on the search for a guitar pick that was durable enough but also gave great attack and a "sharp" tone to cut through the mix. As a result, the guitar pick also gives the player more control and faster speed when playing notes. You also have the choice of three different gauges when it comes to buying these signature picks. These include 0.73mm, 0.94mm (Custom gauge unable to find in any other Dunlop range) and 1.14mm. With these signatures Metallica picks, you'll be riffing in no time.

This set of guitar picks comes in a pack of five. The first four comes with a different band members name along with their signature. The fifth guitar pick has a logo of the band. These guitar picks can be collected or they can be used as they as made from good quality celluloid and come with a medium gauge of 0.71mm. Not much more can be said about these guitar picks in particular as they are not necessarily official Metallica merchandise.

However, they are still really cool picks for those die-hard metallic fans out there who would like to add these to their collection. It would be especially rare to find a pick with Lars Ulrich's signature on it. The reason for this is because he is the drummer so not many guitar picks get printed with his signature on it. The same would apply for Robert Trujillo who is the bassist of the band however I believe it has been said that there are actual and official Robert Trujillo guitar picks. Having said that, Robert is most famously known for being a bass guitar player that uses his fingers and does not really rely on bass guitar picks for playing.

This pack is official merchandise from the Metallica store. While they may not necessarily use these exact guitar picks, they are still cool as they have different images on them. 3 of the images are of Band albums which include:

The fourth guitar pick in this pack has a pic of James Hetfield's signature ESP Les Paul shape with the cross on the bottom. The last pick is a plain black one with the white Metallica logo.

The best pick out of this range for us has to be Kirk Hammet's custom Green Jazz III nylon plectrum which sports a V shape cut out which not only looks cool but has a function too. That function is the V cut out, which gives the player more grip on the guitar pick. Kirk used to use the regular jazz III shape and cut out his own V for extra grip.

So Dunlop just incorporated this into his custom pick. A little trick,  the V cut is the perfect pick slide for epic noise in between riffs and the signature Kirk sliding side. Kirk's signature guitar picks come in an awesome guitar pick holder. It is also worth mentioning that his signature pick comes in luminous green color. so you'll never lose these...yea right! Read more about the Jazz III shape in our list of best guitar picks here.

Check out the video below. It's from NAMM where the guys at Dunlop talk about Kirk's custom pick and the Metallica range among others. We recommend you start watching from 2:09.