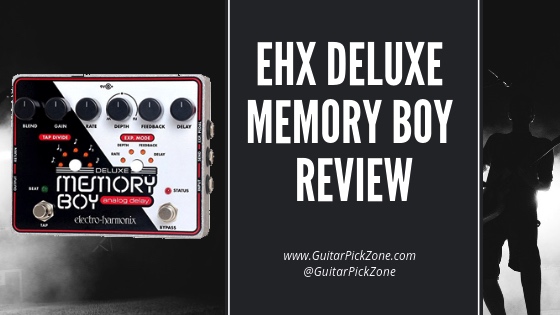 This is my EHX Deluxe Memory Boy review. The memory boy is a pedal that has stood out to me and thus, I have decided to give this delay pedal a good review.

Over the years I have played through a fair amount of echo boxes.

From the cheapest echo box to the top of the range of high-tech delays. But the one delay unit I really fell in love with is the original Electro Harmonix Deluxe Memory Man.

The original and vintage "Memory Man" is what got me into the EHX delay. But it is the "Deluxe Memory Boy" I'll be discussing in this article. However, in order to give you some background to this pedal, I'll explain the vintage version. And then give you my thoughts on the current and modern Deluxe Memory Boy.

The great thing about the Memory Boy is its warm delays. Including the beautifully rich, organic modulation and that powerful and very musical preamp. No fancy features, just the bare minimum with quality components. But it’s the combination of all the 3 components that made this unit special. If you would take one of these away, you’re left with a generic delay.

A lot of musicians have bought into the Electro Harmonix “tone legend”. And Electro Harmonix was quick to capitalize on this and have since built upon the legacy of this little wonder box. Along with many more echo and delay units. Where once the Memory Man was only available as regular and Deluxe versions, Electro Harmonix is now offering no less than 6 delay and echo units.

Shrinked to the new, smaller enclosure, the EHX Memory Man is still going strong. Nut has now become in-house competition for all other EHX delay and echo units. All these pedals are advertised on the back of the legendary Electro Harmonix legacy. So let’s test one of their latest echo units, the Deluxe Memory Boy.

Considering its name, the Deluxe Memory Boy arrives with tons of features none of the other EHX echos units have. The feature list includes:

And much more. Not bad. Let’s plug it between my Fender USA Stratocaster and Fender Blues Deluxe in the clean channel and see if all that glitters is gold here.

While sounding pretty good and a range that allows settings from clean to overdriven tone. The Electro Harmonix Deluxe Memory Boy doesn’t have the same warmth I get from my vintage Memory Man unit. And it certainly lost a bit of its bite.

This might not be a serious issue for many since most guitarists are probably happy to run the preamp on the unit level to avoid signal clipping (overdrive). And simply place an additional overdrive or distortion in front of the delay unit. If this is you, simply skip my preamp excursion.

I like to add a little grit to my delay tone and saving on extra pedals is always good. The Memory Boy’s preamp is not identical to those of my vintage Memory Mans. Especially when you turn up the preamp of the Memory Boy. It hints more to the raspier and harsher tone I recognize from the current Deluxe Memory Man re-issues.

But make no mistake, you still get a decent tone and we’re talking differences most wouldn’t even consider worth talking about. And let’s face it unless you trying to score a vintage unit, you will find it hard to come across a similarly priced delay unit from other manufacturers. Especially those with preamps built-in.

I still wouldn’t want to use its preamp hotter than unity gain (clean). It’s just not musical to my ears. It’s one of the points that made the original Memory Man special.

How much delay do you need? Are 700 milliseconds enough? That’s what the Memory Boy can do. That’s quite a punch compared to the original Memory Man, which promised up to 500 milliseconds. But hardly any unit ever got past the 400-millisecond mark.

The Feedback knob sets the number of repeats and also allows to send the delay into self-oscillation.

In another Deluxe Memory Boy review, I came across complaints about the repeats being either too dark or too bright. In my case, I was surprised was how clean and accurate the echo repeats were; almost digital sounding.

EHX has an added filter that can take off the brightness according to taste. It seems that many users skip the user manual and in particular the paragraph about this filter. To activate this feature the user has to press a combination of buttons and knobs.

You really have to study the manual to know this. But once set this pedal, you're probably never going to change it anyway. The results are quite stunning. From almost ‘digital’ sounding to a pleasant ‘warmth.’ It’s easy to fine tune the tone of the echoes. Pretty neat, check the manual. I’m sure many would change their negative reviews if they’d known about this filter.

The modulation section is comprised of Rate and Depth. And might leave many people wondering why it exists.

The controls are often more powerful than needed offering loads of sound sculpturing possibilities. But it also leaves many wondering in the dark.

To get you close, try to turn the Rate all the way anti-clockwise. And adjust the Depth only a little to the left for modulation. Or, to the right for vibrato. Don’t go over the 10 o’clock or 2 o’clock positions. Adjust to taste from here. Lifting the Rate a little will give the repeats a fluid feel. Almost like a chorus sound. Something that could possibly be achieved using a chorus pedal or something similar.

How does it compare to the original Memory Man? Well, the Memory Boy Deluxe does a nice job. But it’s light-years away from the richness and lushness of its older brother.

The delay, modulation, and preamp do a good job but as a whole lack of character. It’s a good but somehow generic sounding echo unit. What makes this box interesting are really the techno gizmos and here it’s really collecting points.

A feature usually reserved for digital units or the top of the range analog echoes. And the correct delay settings could be only a couple of taps away. This is where the EHX Deluxe Memory Boy really scores for me.

And the Memory Boy Deluxe allows even more quick control over your sound. Plug an expression pedal in and control the modulation rate, modulation depth, feedback (great for sending the pedal into self-oscillation and back in a live situation) and delay time.

All these features will sound like science fiction to users of previous EHX products. But they’re very intuitive and easy to use and will provide hours of creative fun. It’s quite phenomenal to have all these features packed in a quality analog delay pedal in its price bracket.

Of course, the pedal doesn’t offer any delay time presets and it might well be a drawback for some. But if you can live without presets the Electro Harmonix Deluxe Memory Boy is definitely worth a closer look. Don’t let the name put you off.

Rounding Off The Review

To round off this Deluxe memory boy review, the pedal offers a slightly better tone. This is down to a more dynamic preamp and lusher modulation. The Deluxe Memory Boy on the other hand still offers a pretty good tone but mainly impresses with its modern features and blows most competition easily out of the water.

That said, I’m happy to go back to my early 80′s and early 90′s vintage Deluxe Memory Man. No mind-boggling techno features, no true bypass nonsense but pure, great tone.

Guitarists getting modern EHX echos buying into a myth. Great new delay pedal from EHX but they seem to lack character, which originally was what set this company’s products apart.