So you've got yourself a pedal that requires that has a tap tempo function and you've realised that you're gonna need a tap tempo switch to accompany your pedal. If you're new to the world of tap tempo or if you're accustomed to it, you've come to the right place as I'll be discussing some of the best tap tempo pedal for effects available on the market as well as answering some frequently asked questions when it comes to an external tap tempo pedal. Let's jump right in..

What Is A Tap Tempo Pedal? 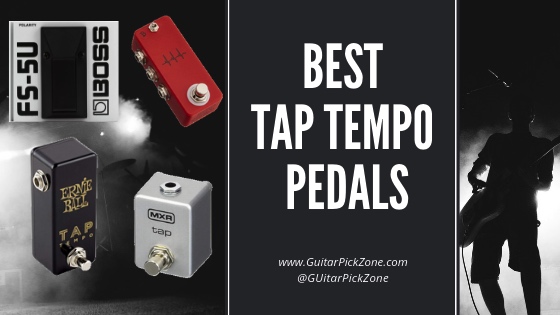 A tap tempo pedal sometimes referred to as a tap tempo switch is an external momentary switch that connects to the tempo or expression output of your delay or modulation pedal.

This external tempo pedal allows you to tap in the speed or the time (known as tempo) of the pedal that you are using. The great thing about tap tempo pedals is that they do not require any power to be used.

Tap tempo pedals all have momentary switches which is different to your regular on/off switch of regular effects pedals. You can think of a momentary switch like a sustain pedal of a piano as it "works for a moment". This is quite hard to put into words but I'll provide some videos below which better demonstrate this concept.

Why the Need for a Tap tempo?

Almost all modulation and delay effect pedals that I can think of allow you to control the time of the effect using a knob. However, this is not always convenient when jamming or playing live to songs with different tempos. You don't want to have to bend down after each song to set the time of the pedal manually. Therefore the tap tempo pedal allows you to set the time of your delay or modulation effect very quickly with your foot. A tap tempo pedal also allows for the most accurate way of setting the tempo. When doing so manually, it is hard to know that you're setting the correct tempo.

Types of Pedals You Can Use A Tempo Switch?

There are many types of pedals you can use tap tempo on however they generally include time and modulation effects such as delay and tremolo. Some reverb pedals come with a tap tempo function and I've even seen a distortion pedal that has a tap tempo function. Having said that, delay pedals are definitely the most popular to use a tap tempo as delay is a time based effect and therefore controlling this time in a song is important for some. It is very important to note that not all delay or modulation pedals have the function for an external tap tempo switch so make sure before buying one that your pedal allows for tap tempo.

The boss tap tempo is definitely one of the most popular tap tempo pedals as it has been around for such a long time. It offers a nice big switch for easy tap tempo input and furthermore, it allows you to change the polarity. However, I wouldn't worry about that. The Boss is a great choice because the price is very reasonable and I can guarantee you that these pedals can take an absolute beating and still work. I've had my Boss tap tempo on my pedal board for over 10 years now and it has survived and still works perfectly. Boss pedals, in general, are known for their durability. The only downside to the Boss tap tempo is that is is quite big and could take up some unnecessary space if that is an issue for you.

The MXR tap tempo is a relatively new tap tempo switch to the market. This pedal is definitely the smallest and most compact tap tempo I've ever come across. This makes for a great addition to any pedal board as it is such a great space saver. It is also built in a hardy case which means it can also withstand a pounding. This MXR tap tempo pedal is a definite contender for the number one spot however just lost to the Boss pedal as I've owned the Boss for a long time.

This is a new addition to the tap tempo pedal market and works in exactly the same way as all the others with its momentary switch. In terms of size it is in the middle when compared to the Boss and MXR above. That being said, it is still the size of a mini guitar pedal which are known for their compact size. There's not much to separate this from the other tap tempo's but we know Ernie Ball to be a very reputable brand so we can definitely expect a great quality tap tempo.

I have to admit that this tap tempo pedal by JHS is quite spectacular. The reason I think this is because it is the size of a mini guitar pedal yet it allows you to connect up to three separate pedals to control the tempo of each of these pedals from this one device. It also has a button that flashes the tempo time which no other pedals have. I think being able to control the tempo of 3 different delay pedals from this one tap tempo switch is very cool and handy if you have more than one pedal with tap functions. The biggest downside to this pedal is its price as it is very expensive when compared to the others featured in this list.

What this actually is, is a sustain pedal for a keyboard. But before you stop reading this, let me assure that this will definitely work to set the tempo of your delay or modulation effects. I know this because I used one for a while when I had misplaced my Boss tap. I didn't believe that this would work at first but it really does and the reason it works well for tap tempo is because a keyboard sustain pedal is basically a momentary switch just like any other tap tempo pedal. You can use any keyboard sustain pedal but I'd recomend this one as Yamaha is a reputable brand.

I've been reluctant to add this Zoom footswitch to this list as I have not tried it nor have I seen it in action. Having said that, from doing a bit of research I've come to understand that this footswitch is able to let you tap in the tempo but I cannot confirm that for sure. These were initially designed for the Zoom multi effects but can be used with other pedals besides for Zoom. From the look of this switch, I'd say it looks pretty decent but perhaps check out some of the others on this list before reverting to the Zoom.

As you can see from this list, most of the tap tempos do the same thing and it can be quite a challenge to decide which one to go for. I'd say if you are unsure try deciding between the top three in this list as they are the most widely used and known tap tempo pedals. If you have any question please don't hesitate to contact me.