From the research that I have done, it would seem conclusive to say that John Mayer’s guitar pick journey is one that has seen the use of two different guitar picks.

For the most part of his career, John used a specific kind of pick, and around 2014-2015, he switched over to a guitar pick that he is currently still using. In this blog post, we’ll explore the guitar picks that John Mayer has used and the ones he is using these days.

What are the Two Picks John Mayer Used?

I can with absolute certainty confirm that Mayer has used the Dunlop Tortex 0.88mm guitar pick and now has moved onto the celluloid guitar picks by PickBoy.

His plectrum journey is one that is not that simple and needs some ironing out and explaining which I will do below.

In order to explain this, let us take a look at the guitar picks separately which will hopefully help piece together the puzzle and answer some questions surrounding John Mayer’s plectrum use.

The green Tortex guitar pick by Jim Dunlop is the first plectrum we know Mayer to have used. This green guitar pick has been seen on multiple live recordings as well as picks that fans have caught at concerts.

However, there seems to be much confusion surrounding which gauge guitar pick John Mayer used. We see that he uses a green tortex pick which one would assume is the 0.88mm version and rightfully so. Because that is the color that corresponds to the Tortex gauge.

The problem is that because John Mayer gets custom-printed guitar picks from Dunlop, we have also seen examples of his picks in blue, black, purple, and yellow which would suggest other gauges of the Tortex being used.

This might not be the case as he might have simply requested a different color guitar pick for specific concerts or tours whilst still keeping the 0.88mm gauge. This is something that I am sure Dunlop would do for him.

On the other hand, it could also be possible that John has explored and used other gauged Tortex guitar picks which is why we possibly see other colors in his guitar pick Arsenal.

John Mayer has never really explicitly spoken about his guitar picks but it is common knowledge that he used the 0.88mm gauge, and from my decade of exploring guitar picks, I can tell just by looking at pictures of his picks that they resemble this gauge.

If you don’t know much about tortex, check out why they’re some of the best guitar picks here. 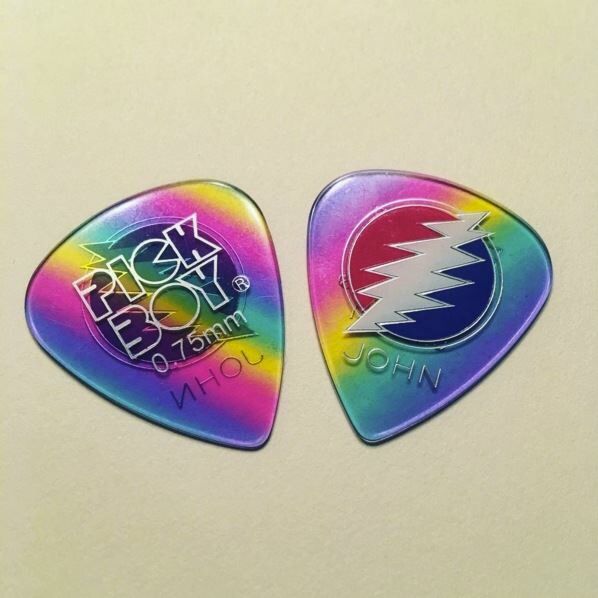 After being a long-time user of the Dunlop Tortex guitar picks, John Mayer made a switch to plectrum. His change in plectrum is one that saw a change in brand, gauge as well as material.

He moved over to the 0.75mm rainbow celluloid picks by PickBoy which has been a long-time maker of guitar picks. Around the time of making the switch of guitar pick was the same time John Mayer joined the Dead & Company tour. In my opinion, it is no coincidence that this event changed his use of a guitar pick.

I’d be safe in assuming that he most likely moved over to the celluloid picks because of the classic & vintage sound/feel that the celluloid guitar pick provides. This kind of guitar pick would be one more reminiscent of the vintage plectrums which fits in perfectly with the Dead & Company.

It would also seem, judging by various fan photos, that John Mayer even sticks to using the celluloid picks by Pickboy for his solo shows. We can even see that the custom imprints are very similar to those that the old-time rockers used to have done. An example of this would be Eric Clapton or Iron Maidens’ guitar picks.

We can see that John Mayer has made a two-step journey in the guitar pick world which in my opinion, is more than most guitar players take.

What I mean by this is that most guitarists will use one type of guitar pick and stick with it for life. This is common, however, John Mayer seems to explore different guitar picks.

The one thing I can say is that it does not seem like he explores different shapes as he seems to stick with the regular shape of a guitar picks and doesn’t delve into jazz picks or anything like that.

What Guitar Picks Does The Edge From U2 Use?