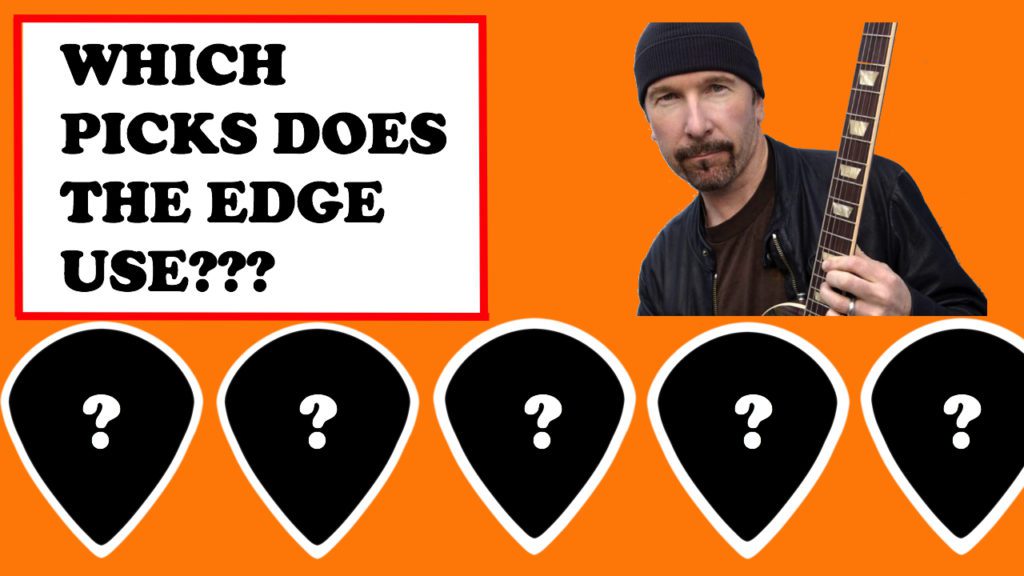 So you're here because you want to know which guitar picks the Edge from the legendary band U2, uses. In this post I'll tell you everything you need to know about the specific guitar pick used by the edge as well as give you an overview of the characteristics of the plectrum and how such a small piece of nylon can have such an integral part of a guitarists and bands sound.

It is no secret that The Edge from U2 has used the blue nylon Herdim guitar picks since the beginning. He also proudly admits that he still uses these exact Herdim guitar picks today and makes no bones about the fact that his plectrum forms a massive part of his guitar sound especially from their earlier records. 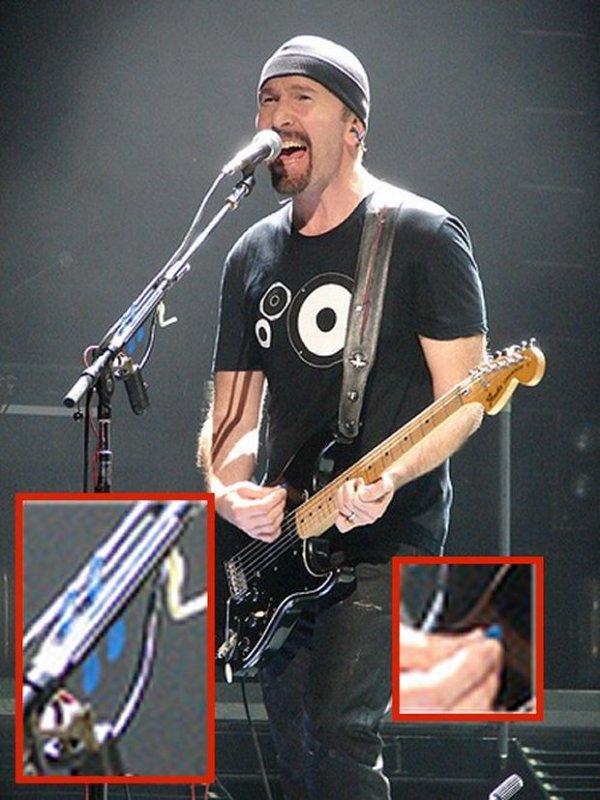 Herdim are a German company (formerly known as West Germany) which started manufacturing guitar picks from the early 60's. Despite the fact that West Germany no longer exists and only Germany exists, this guitar pick company carries on making these exact guitar picks which are available to everyone. The Edge has been using the Herdim blue guitar picks since the 1970's when the band started. I'll explain below how his guitar pick became so key to his tone. First, let's look at the characteristics of The Edge's guitar picks.

Characteristics of The Edge's Guitar Pick

The Herdim blue guitar picks that the Edge uses are made from the nylon material. Nylon as a guitar pick material is known for its warm sound. However, The Edge uses this guitar pick in such a way that makes it sound brighter. I'll get to that in a bit..

Whilst the shape of the guitar pick is considered the be the regular 351 shape, I believe it it is slightly different. The Herdim guitar picks resemble the regular guitar pick shape but they are slightly bigger yet somehow still feel almost like a jazz guitar pick. It is very hard to explain and should be experienced in person by using this pick to strike a note. 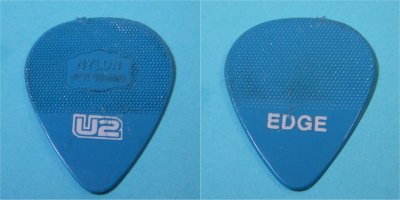 The Herdim guitar picks are made with a stubbed gripping surface which are commonly referred to as "dimples". These dimples are very reminiscent of the Herco guitar picks (now owned by Jim Dunlop) which were a popular plectrum among guitarists in the time of the 70's because of this surface. The dimples are meant for grip BUT The Edge actually turns the guitar pick around and uses the dimples to strike the guitar string. This add to a crisp and bright sound that chimes and provides somewhat of a very light distorted sound. Whilst this element of The Edge's guitar pick is an important part of his sound, it should always be remembered that it is only one of many parts that make up his tone. 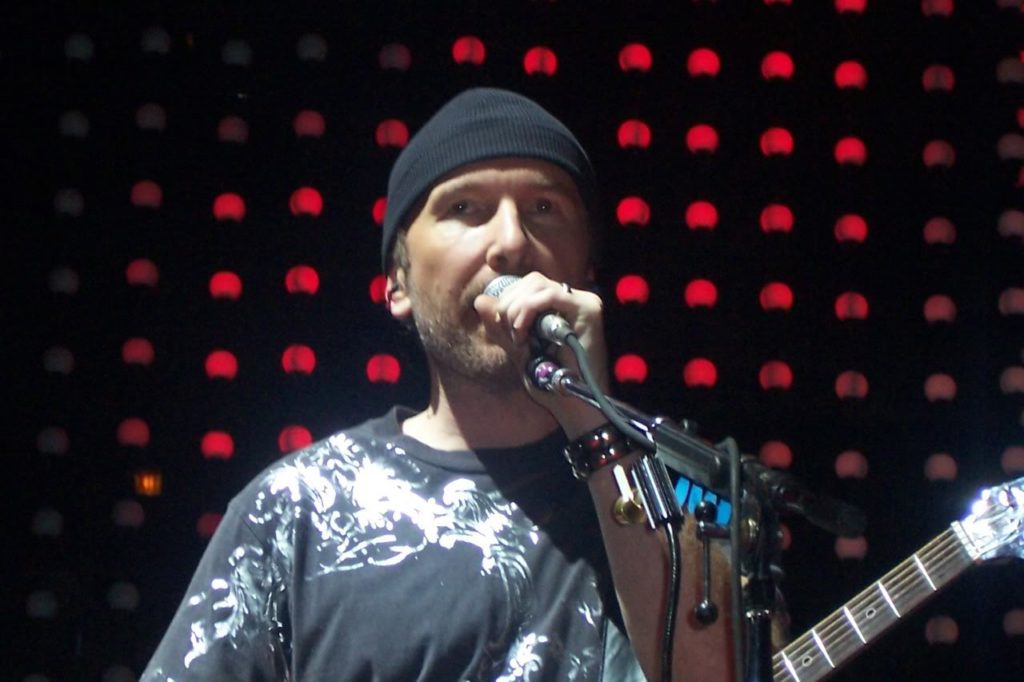 What Gauge are The Edge's Herdim Guitar Picks?

Herdim produce this particular guitar pick in three different gauges with each gauge being a different color as you can see below.

It is evident that The Edges uses the blue Herdim guitar picks. This can be backed up by statements he's made regarding his guitar picks as well as a plethora of pictures of his rocking these exact Herdim blue guitar picks for decades now. One would only assume then that the gauge guitar pick that The Edge uses is the 1.1mm Blue Herdim pick. The problem is that I've heard a few times that he uses a 0.88mm gauge Herdim. Which to me, makes no sense as he's clearly stated in interviews that he likes the sound of the blue Herdim. Anyway, we can leave this one up to the public but i'm gonna go with saying he uses a 1.1mm guitar pick. 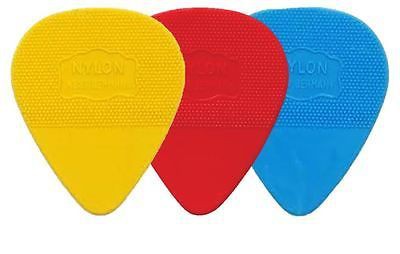 It is clear that The Edge's love for this Herdim guitar pick rubbed off onto Bono and we can now see that Bono also uses a Herdim plectrum with dimples. It is not often that Bono plays guitar but when he does it is pretty much always acoustic. I am usure of the gauge of Bono's Herdim but i'd assume, given the application in which it is being used that it would be on the softer side. 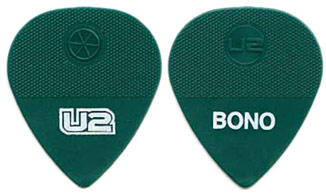 One of the cool things we see nowadays is that the Herdim company make these picks with exclusive U2 branding which are made just for The Edge and Bono. I'd be reluctant to add this pick to my list of best guitar picks as they're not commonly know. But one day it will grace that list. 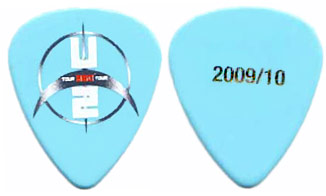