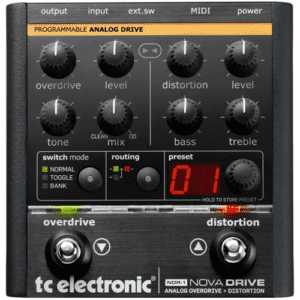 Mention the words ‘digital’ and ‘distortion’ together to your average guitarist and he’ll likely shout abuse as he hits you – justifiably so too.

This is because while digital circuitry works very well for certain types of effects, only analog can deliver the tone that we like for our distortion effects.

Digital has some great advantages though – programmability and flexibility. For example, many delays and chorus effects as well as modulation in general. Is becoming increasingly popular.

It allows us to store patches as well as control things from other digital devices. Usually, these two worlds do not meet, and we end up compromising either tone or control, depending on our preferences.

The ambitious concept behind the Nova Drive is analog circuitry for tone, digital for control and patches, packing two different analog distortion effects (overdrive and distortion) in one relatively small stompbox.

This isn’t overdrive or distortion either – it’s both, with each having its own separate “engine”, so both can be used together. What’s more, you can route the two in series or parallel and in any order and then save all the settings to any of the 18 patches.

First Impressions Of The Nova Drive

The first impressions are good – it is an attractive pedal with a solid feel. The weight is a hefty 0.8 kg, thanks to the solidly made, neatly finished black metal enclosure.

The knobs are rubber with clear position markers and the pots and switches are bolted to the chassis and have a solid feel when used.

Connection is fairly simple, with input and output jacks, a DC power input, and a MIDI input for external control. There is also an external switch jack for the TC Electronic G-Switch, which adds a further three footswitches for additional foot control.

It is worth noting that there is no battery compartment as the Nova Drive uses 380 mA of 12V DC power – which is out of the range of battery power (and is more than some commonly used pedalboard power units can supply). Thankfully, a wall-wart power supply is included.

Compared to most common overdrive or distortion pedals, the Nova Drive is fairly complex. However TC Electronic has done a great job of making it simple to use – for the most part, it operates like two pedals in one housing.

Most of the controls are familiar and even those that are not (such as the patch functions, switch modes, and routing) are easy to figure out. The only time I needed to refer to the manual was to figure out how to change the bypass modes.

How Does The Nova Drive Sound?

Sound is important. That goes without saying. So let’s take a look at how this pedal really sounds.

The overdrive is a smooth, natural overdrive with a very usable but simple tone control, good dynamics, and a good range of drive on tap. The drive range goes from clean boost to heavy overdrive but doesn’t quite make it into modern metal territory, even with humbuckers.

It is very responsive to playing dynamics and volume changes so you can leave it cranked and use the guitar’s volume control to set the drive.

There is a slight upper midrange emphasis which stops it from being a perfectly transparent clean boost, but not too excessive, just a subtle and usable ‘push’ to the sound. A final and unique feature is the ability to mix in the bypassed sound with the overdriven to add more clarity to the tone.

The distortion is capable of everything from slightly crunchy to classic metal tones – all without any hint of harshness. The distortion character is very reminiscent of the vintage RAT distortions, but with a slightly fuller low end.

Once again, the drive is very responsive to the guitar’s volume control and string separation is very good up until the heaviest settings. Quite simply, the distortion section of the Nova Drive is up there with some of the best.

This is where things get really interesting. The different combinations give you a huge range of cascaded and parallel sounds.

I found this took a bit of experimentation to find the best combinations, but the results were well worth it.

The bypass functions are impressive: a true bypass for the purists and a buffered bypass for those who are using more complex effect chains.

The true bypass has a tendency to occasional ‘pops’ when switching, but that’s to be expected and is the price you pay for any true bypass.

The buffered bypass is excellent, having a very transparent sound with no obvious tone or dynamic change to the bypassed signal.

The Nova Drive is an easy-to-use but very powerful distortion pedal. Most importantly it sounds great!

It is very pricy for a drive pedal, but considering it could easily take the place of two boutique-level pedals with little to no tonal sacrifice and also add in extra programmability, it’s actually easy to justify.