Today we’re going to look at one of my favorite compressor pedals of all time. It’s the T Rex Comp Nova review. Keep reading as I review this incredible guitar pedal. One that I believe could easily be considered a boutique effects pedal.

The fact that the T Rex Comp Nova has been around for such a long time speaks volumes as to the quality and popularity of this compressor pedal.

What is the T Rex Comp Nova?

The T-Rex Comp Nova is a compressor pedal (as the name would suggest) for the guitar. However, I believe this pedal works well on bass guitars too.

All compressors control dynamics, leveling volumes by boosting quieter sounds and cutting louder ones. However, they tend to fall into one of two categories: the obvious “effect” types and the “studio” types.

The obvious “effect” types such as the Boss CS-3, have an audible pumping quality as they operate. And, these types of pedals tend to add a lot of tonal coloration to the sound. On the other hand, the “studio” types tend to be pretty transparent and relatively subtle, leveling volumes. While keeping the tone intact and providing more of a difference in feel than in tone.

Thankfully, this has been changing in recent years with some stompbox compressors approaching the effect of the studio models. One of these modern stompbox models is the T-Rex Comp-Nova. 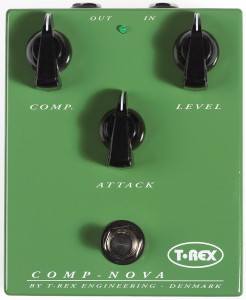 The Comp-Nova is a little underwhelming initially. Particularly considering it’s a fairly expensive compressor. It has a rather mundane rectangular casing painted a rather unattractive green. The rubber feet are the small sticky type (one of which fell off within a few minutes of use on a carpeted floor).

The battery compartment is a plastic type with a hinged door. To open it, you need a small flat-bladed screwdriver (or similar) and open it by levering it between the door and the frame. The switch is a non-latching type, which never feels as solid as the latching models, but does seem fairly solid otherwise.

On the upside, the knobs are solid chicken head types with a very solid feel when used and the sockets hold plugs firmly. T-Rex gives a full two-year warranty, which is great.

Despite the initial gripes I had with my  T Rex comp nova pedal, I’ve actually had it since 2010 and it still works just as well as it did on the day that I bought it. Seriously these pedals are built like absolute tanks.

Compressors can be a little confusing to use at first. This is because they are a relatively subtle effect that is more felt in how the guitar responds to dynamics than heard.

Having only three controls (Compression, Attack & Level), the Comp-Nova is an easy compressor to use. Simply dial up the compression to control how much “squish” you get, and set the attack to let more or less of the natural guitar’s attack through before the compressor clamps down. And, dial back the level so it’s about the same volume as it is bypassed when played normally. 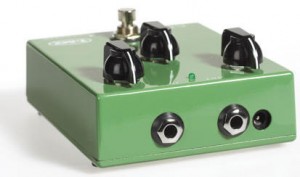 How Does The T-Rex Comp Nova Sound?

This is where the Comp-Nova shines. It delivers a very natural, smooth sound that does not color the tone noticeably. At low to medium settings, it does not lose any highs and retains note clarity.

Turning the compression up to the maximum setting, you can get a more obvious squashed effect and the highs become a little choked, but far less of an effect than any other pedal comp I have used.

There are also no artifacts at all when the threshold is crossed and it starts boosting or cutting the level. This is one area where many otherwise great compressors fall down.

In fact, it can be very hard to tell when it has kicked in during normal play other than the way the guitar sits more solidly in the mix – and that is the mark of a great transparent compressor.

Even at its fastest attack setting, the Comp-Nova lets a little natural attack through, which is one of the things that keeps it more natural sounding but may make it unsuitable for very aggressive players or for acoustic guitarists.

The noise level of the T-rex comp nova is very low, although – like any compressor – it will boost the noise from a noisy guitar. However, it does not seem to add much noise of its own to the signal.

If you are looking for a natural-sounding compressor to level your guitar signal while keeping the tone intact, the T-Rex Comp-Nova is right up amongst the best sounding and well worth trying out.

However, if you are looking for a more obvious compression sound, you would be better suited to looking elsewhere. The only downside is in the drab cosmetics and solidity – neither of which are dealbreakers.