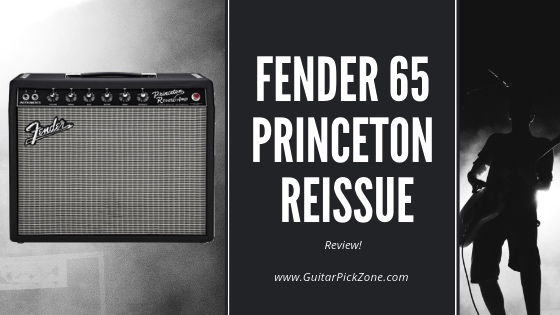 I decided to do a Fender 65 Princeton Reverb reissue review based on my deep love for the original version. One of my favorite vintage guitar amps ever is the 1965 Fender Princeton Reverb.

So, when I found out about the reissue, I jumped at the opportunity to do a Princeton Reverb reissue review.

The classic Princeton amp was the studio amp of choice for many famous session guitarists in the ’70s and ’80s. As it offered the Fender “Blackface” tone at reasonable volume levels.

The Blackface amps feature some of the best ever clean and gritty guitar tones. With a natural midrange scoop that allowed a rhythm part to compliment a singer without getting in the way.

The new ’65 Princeton is not an exact replica of the original and vintage Princeton amp. But, features a few updates: the power supply has been changed slightly to comply with modern safety regulation.

And a modern printed circuit board construction is used, rather than the original hand-wired board.

Otherwise, it is the same all-tube, a single-channel amp with reverb and tremolo (or vibrato, as Fender always call it). Which, puts out 15 watts into a 10″ speaker.

The valve complement is three 12AX7 preamp valves, a 12AT7 for the reverb, a 5AR4 rectifier and two 6V6 power valves. Which is a fairly typical valve line-up for a Fender-style amplifier.

The speaker is a 10″ Jensen C-10R. Furthermore, is also a typical Fender choice. And, the amp comes complete with a dust cover and reverb/vibrato footswitch, which is a nice touch.

So all-in-all, Fender have managed to get what on paper looks like a good reissue of the classic Princeton. Unfortunately, this reissue does not come with a built-in amp stand as some older Fender amps did.

How Does The 65 Princeton Reissue Sound?

Once warmed up, the Princeton sounded as expected. Just like a typical Blackface Fender, with the scooped midrange, sparkly highs and surprisingly big bass that made these amps famous. It is a little bright and clangy out of the box. But I would expect that to mellow out a little like the speaker breaks in. In fact, after pounding the amp for a few days, I found that was already beginning to happen.

The Control Panel and EQ

The simple treble and bass tone controls work very well. I started with all sixes on the dials (a good starting point for Fender amps). And the amp immediately sounded very good. With a little experimentation, I found I preferred the controls set high (around eight or nine). Which made the amp break up a little earlier, but gave it more of an open tone.

With the volume set on five or six and the tones set on eight, the amp responded very well to playing dynamics and the guitar’s volume control. ranging from sparkly clean to a bluesy overdrive. All at small room volume.

Cranking the amp higher let me get a more overdriven and compressed sound with only a small gain in volume.

At nine or ten on the volume control, the low end started to get a little flabby and the cabinet developed a rattle that would be a nightmare in the studio. Probably easy to track down and stop, but annoying in an amplifier in this price range.

One other problem that surfaced was a noisy valve adding in more hiss that was acceptable, but popping in a new valve fixed that immediately. The stock valves are new production and while they work well enough and the amp sounds good stock, the tone could likely be improved even further by going for a good set of NOS valves.

Is The Fender Princeton Loud Enough?

While this amp is “only” 15 watts, it’s still surprisingly loud when turned up and isn’t for late night cranked playing at home unless you have very understanding neighbors.

Unfortunately, it’s not quite loud enough to stay clean at gig volumes or hang with a loud drummer by itself. For that, Princeton’s bigger brother the Deluxe Reverb is ideal.

But if you want to keep stage volumes down and mic up for the extra coverage, the Princeton will do the job admirably.

The ’65 Princeton Reverb is a very tuneful amp, ideal for those looking for the tone of a good Fender amp at manageable volume levels (such as home studio owners or gigging guitarists who want to keep stage levels down and mic up).

The quality built-in reverb and tremolo also makes it a cinch if that’s what you are looking for in a smaller amp. The only downside, in my opinion, is the high price tag placed on this amp. However, it is a Fender so you know what you are getting. And, you can expect this amp to last generations.

If you enjoyed this Fender 65 Princeton Reverb Reissue Review, you might find some of these articles particularly interesting.