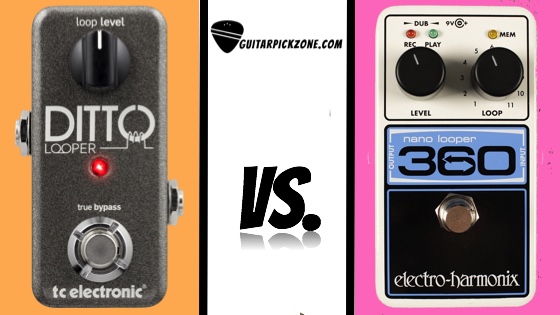 I’ll be discussing the differences as well as the similarities between these two pedals and give my thoughts on which one I prefer.

These two loopers are best suited for home or practice use and I wouldn’t necessarily promote these two as pedals that you can use successfully live in a band setting.

Having said that, If you are a solo performer looking for a quick, easy and effective way to loop, then these pedals will definitely work. However, There are bigger units available which are better suited for live performances.

They’re still very evenly matched and there are only some slight differences which separate these two pedals.

>> Check The Price Of The Ditto Loop<<

My Conclusion: Ditto Looper Vs. EHX 360

I know which loop of the two I prefer, however, I’ve decided to outline each pedal so that you can make the best-educated choice for you. One pedal is not necessarily better than the other one but it rather comes down to what are your needs and if the extra feature of the EHX is something you will need. That being said, for me in my personal opinion there’s one clear winner and I’ll mention it and why at the end of this post. Let’s take a look at the differences and similarities between the Ehx 360 vs. Ditto looper by TC electronics.

With regards to the sound quality of the Ditto Looper Vs. EHX 360, I’d have to say that there is not much that separates these two. Both offer the same high-quality sound. However, I find that the EHX 360 sounds slightly worse than the Ditto when you start adding a lot of layer on top of each other. So on that basis, I’d say the Ditto sounds slightly better.

The Ditto looper is about as simple as a loop pedal can come. With one footswitch and one volume control knob. Whilst the EHX 360 has both level control and the added feature of the 11 separate memory banks for loop storage. On the other hand, however, The Ditto looper by TC electronics is true bypass whilst the EHX 360 makes no mention of such a feature to my knowledge.

In terms of versatility, the EHX 360 is the clear winner as it has the memory bank feature. Both pedals, however, function in pretty much the same way. So for function the Ditto Looper vs. EHX 360 are on par. Versatility wise, the TC wins.

When it comes to quality I definitely can’t separate these two as both TC electronics who make the Ditto as well as Electro-Harmonix who make the 360 are some of the most reputable pedal manufacturers in the world. Both of whom are renowned for their quality. I believe whichever pedal you decided between, you’ll certainly receive a quality product. I have yet to have any problems with either of these pedals.

Comparing the size between the Ditto Looper vs. EHX 360 is simple. The Ditto wins as it is more compact in size than the EHX 360. The small size of the Ditto Looper is in my opinion, the biggest selling point of the pedal (along with it’s simple and intuitive controls) and is what I love most about the TC Electronics Ditto Looper.

For me, overall the Ditto Looper is the winner between these two pedals. I mentioned at the start of this comparison that both these loopers are not really meant for live purposes. And with that in mind, the Ditto outdoes the EHX 360 because it is so compact and so easy to use. Yes, the EHX 360 looper by Electro-Harmonix has a memory bank feature but there are not many guitar players I know that actually use this function. If this memory bank function is something that is important and necessary for you, then I’d say go for the EHX 360. However, I’m almost certain you won’t regret the Ditto looper as it is a great practice and creative tool for your guitar playing.