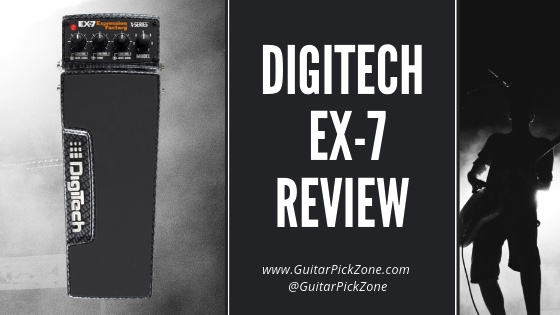 So you want the honest Digitech EX-7 Review? Here it goes...

But In comparison to the rainbow-colored stompboxes, we've come to know. The Digitech EX7 Expression Factory is certainly not much to look at. It almost looks like a plain black brick.

But effects are about tone and not their looks. So, with that said, what does the EX-7 Expression Factory do and how does it sound?

What Is The Digitech EX-7 Expression Factory?

The Digitech EX-7 Expression Factory is a effects modeler. Meaning, it digitally reproduces the sound of other pedals and tones.

I’ve owned many digital guitar effects over the years. And while some of these effects units provided stunning results. Most of them lacked character. And we're prone to breaking way quicker than analog units. 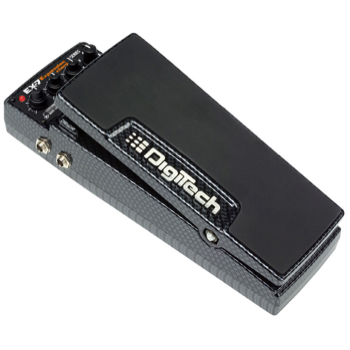 Having said that, I still own many analog stomp boxes that have been around for 30 years. And that still works perfectly to this day.

The Digitech EX7 Expression Factory offers 7 legendary effects. As well as another 7 classic overdrive and distortion tones. Furthermore, these can be assigned to any of the 8 main effects.

How Does The Pedal Work?

The Digitech Expression Factory is a classic rocker pedal. Just like your regular wah or volume pedals. The long black steel enclosure is tough and road-ready.

The front of the pedal has four knobs. Three of these knobs are double-control knobs. These knobs allow for precise tonal tweaks. As well the ability to sculpt the sound of the 7 main presets. The fourth knob on the far right is for selecting effect models.

The Digitech EX7 is very easy to use. But it’s double-control knobs change depending on the selected preset. If you get stuck, the manual is very simple to understand. And explains how this pedal works in greater detail.

Recalling the presets is a bit of a pain. And it is something I'm still trying to figure out. So for this reason, using presets in a rehearsal or live gig might be an issue.

How Does The Digitech EX7 Pedal Sound?

This EX7 by Digitech sounds fantastic. The main effects include the most popular wah tones of all time. Including The Dunlop CryBaby and Vox Clyde McCoy. Followed by Unicord’s UniVibe, a Leslie 147 Rotary Speaker and the daddy of all flangers. As well as the much-sought-after A/DA Flanger. Not forgetting DigiTech’s own legendary effects, the Whammy and the Space Station preset of the super-rare Space Station.

The overdrive and distortion section includes the Dod Overdrive/Preamp, the ProCo Rat, and DigiTech’s Metal Master. As well as the Boss Metal Zone, the Electro Harmonix Big Muff ‘Pi’, Ibanez TS9 and the Boss DS1 Distortion.

All these classic effects in one pedal are epic. And I haven’t even mentioned that each overdrive/distortion can be assigned to various cabinet simulations.

The original Space Station (now discontinued) is unlike any effect I have ever played through. Imagine a heavy reverbed wall-of-sound with added delay. All of which have been pitch-shifted 1 or 2 octaves up or down. The result is a dense, very atmospheric sound-fog. Which is like a shimmering and spiraling synth or organ pad.

The Synth Swell preset on the Digitech Expression Factory works in combination with the Metal Master distortion. But personally, I like to switch off any distortion and play with a clean tone. Especially through the XP300 Space Station Synth Swell preset.

The sounds you get are amazing. The Digitech EX7 Expression Factory does it all in one compact pedal. Those 3 knobs offer almost unlimited control to design your own sound.

The Line6 company produces the Verbzilla pedal. With its Octa Pad setting. As well as the Behringer RV600 Reverb Machine which has Space preset. This is basically a direct clone of the Verbzilla pedal. Both pedals are comparable in tone and approach to the Synth Swell preset of the Digitech.

Owners of the original Whammy-1 find it hard to like the updated Whammy models. While some were indeed inferior imitations of it. The most recent version, the Whammy-4, is certainly the closest to the original and actually pretty decent.

The A/DA Flanger’s most famous user is certainly Eddie Van Halen. You can accurately set the long jet-plane swoosh on slow rate settings. With added distortion before the flanger.

With this setting, you can get those swirly, watery tones. Such tones were made famous by many New Wave and Post-Punk bands from the 70s and 80s.

I find many flanger pedals are one-dimensional. And sound cheap. The A/DA Flanger had an organic and analog warmth to it. The simulation on the DigiTech EX7 Expression Factory is not as good. But close enough to please most. Where the original A/DA flanger sounded quite plumy and ‘juicy’,

the DigiTech EX-7 Expression Factory simulation comes with a bit too much clarity for my liking. But make no mistake, this is still a very good pedal.  And a close-enough simulation of the original pedal. I like the added bonus of adjusting the flange rate with the rocker pedal. This is something the original lacked and is surely made up for with this pedal.

The original UniVibe pedal was designed to imitate a rotating Leslie speaker. However, it was designed in a compact pedal form. The UniVibe was originally made by the British effect builder, Roger Mayer. Mayer had previously built the Octavia pedal. As well as other custom-designed effects for Jimi Hendrix. Hendrix premiered Mayer’s UniVibe at his legendary 1969 Woodstock Festival appearance. And created the tone guitarists all over the world have since been trying to recreate.

The EX7 Expression Factory has a preset simulation of the Leslie 147 Rotary Speaker. I've never played an original UniVibe. And I've also never played through an original Leslie speaker cabinet. Therefore, I'm cautious to make any comparisons to the original. Despite this, this preset sounds pretty cool.

I used to own the Vox Clyde McCoy re-issue from the early 1990s. And I have played countless of times through various Dunlop CryBaby wah pedals over the years.

I prefer the sound of the Vox wah when compared to the Dunlop. The reason is that the Vox sounds warmer. And the Vox is a little less aggressive in terms of sound. For me, the EX-7 sounds identical to the Vox wah. It too sounds exceptionally close to the Dunlop Cry Baby. If you just need the classic wah tone from these iconic pedals, look no further.

I think I've covered just about everything in this Digitech EX-7 Review. If you want a Vox or a Dunlop wah. This pedal is just as good as the original. And even offers 7 more presets. All in one box. And for pretty much the same price tag.

The DigiTech EX7 has a true bypass function. Which of course, most of the original pedals do not. And its wah simulations allow the pedal to be placed anywhere in your chain. Furthermore,  you might be able to save on a couple of overdrive and distortion pedals. Because you can program and assign the EX7’s brilliant overdrive sims to your presets.

DigiTech has done everything right here. Really, there is only one downside to this amazing pedal. And that is that you can’t use the overdrive and distortion tones on their own. Oh, and that it does not come with a chorus effect but I can live with that.

Having said that, the DigiTech EX7 Expression Factory is a killer and absolute winner. And it will satisfy even the most demanding of tone enthusiasts.

And for a reason, it’s the only non-analog unit I have allowed onto my guitar rig.