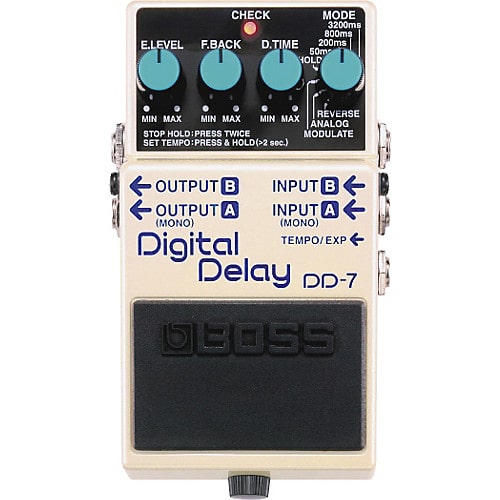 The Boss DD-7 Digital Delay Pedal is a new and updated version of one of the most popular digital delays on the market. Offering more new features and a longer delay time than its predecessor, the Boss DD-7 is a great option for musicians and audio specialists who are interested in guitar effects pedals and producing top-quality audio tracks.

The Boss DD-7 offers delay options from 1ms to 6400ms and a maximum recording time of up to 40 seconds while in hold mode. The delay pedal offers a nominal input and output level of -20 dB, along with an input impedance of 1 M ohm and an output impedance 1 k ohm. In size, the Boss DD-7 Digital Delay Pedal weighs approximately 1.2 pounds and has dimensions of 8 by 10 by 8 inches.

The Boss DD-7 Digital Delay Pedal offers up to 6.4 seconds of delay time and comes with two new delay modes, the Analog Delay and the Modulation Delay. With the Analog Delay, users receive a modeled simulation of the BOSS DM2′s classic effects, and with the Modulation Delay, users can produce chorus-flavored sounds with the Boss DD-7 Digital Delay Pedal. Additionally, the delay pedal can also create many different and innovative effects by using the Boss DD-7′s stereo output, such as studio sweeps made through stereo panning.

Did you know that the DD7 features a very simple yet effective looping function? Having said that, this delay pedal should not necessarily be purchased for its looping function. But rather be considered as a cool extra. If you're looking to get into guitar loop pedals, see the EHX 360 or Ditto Looper by TC Electronics.

The best part about this pedal for me is that it features an analog delay setting. This is something that will allow one to achieve the classic Boss DM-2 sounds, Whilst not necessarily exactly yon point to that pedal, it is still epic to have this kind of versatility from a delay pedal in stompbox size. Due to the fact that Boss doesn't produce an analog delay anymore, this is the closest pedal they have (to my knowledge) to the classic pedal.

The Boss DD-7 Digital Delay Pedal comes with hands-free control, making it more helpful and advantageous for musicians using the product. However, the external foot-switch and an Expression pedal that allows hands-free control is sold separately from the actual Boss DD-7. However, if consumers are willing to shell out the extra money to pick up these two products, they can control tap tempo from the external foot-switch and delay time, effect levels, and feedback – which is great on stage.

Something that Boss has thrown in with this delay pedal is a modulation function. As far as I'm aware, this could be the first time Boss has ever incorporated a mod effect into one of their delays. However, I think it is pretty cool. If you had to ask me what it sounds like, I'd describe it as somewhere in between a chorus pedal and a phaser sound. What makes it quite useless is that it can't be paired with another delay. And therefore can only be used as a stand-alone effect. So let's just say that you won't find guitarists rushing out to get this DD7 for its modulation effect. But rather, it makes up one of the many features of this great and versatile delay pedal.

One great feature that consumers are excited about is the ability of the Boss DD-7 to continue sound without break, even as the delay is turned off and the instrument continues to play. However, when it comes to specifics, complaints have arisen about the fact that when the Boss DD-7 is on hold for recording, the delay cannot be used at the same time, limiting the product’s use in some situations. A downside of this pedal is the price tag. Although you get great bang for your buck, it is still relatively expensive. If you'd like an alternative then I recommend checking out either the Joyo or the Mooer line of guitar pedals which will provide similar features at a cheaper price.